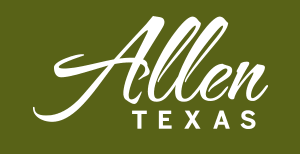 Allen’s history and heritage dates back to prior to the 1800s when the region was inhabited by Caddo and Comanche Indian tribes. As European immigrants began arriving in the 1840s, these tribes migrated west. A historic marker commemorating one of the final conflicts between settlers and native tribes can be found along State Highway 5 and Rowlett Creek near the existing railroad.

The immigrants were in search of free land and arrived by traveling the Texas Road and the Central National Road constructed by the Republic of Texas. A stage line ran from Bonham through McKinney to Allen and Plano, crossing Rowlett Creek where SH 5 exists now. Allen was part of the Peter’s Colony Land Grant from the Republic of Texas to the Texas Emigration and Land Company.

The original township of Allen was laid out according to the Houston and Texas Central Railroad (H&TC), constructed in 1872. In 1918, the H&TC built a combination freight/passenger depot in the Allen Central Business District. The first train robbery in Texas took place in Allen on February 22, 1878, when Sam Bass and his associates pillaged the train. Today’s Allen Heritage Center and Museum is a replica of that original depot. It is the home of the Allen Heritage Guild whose mission is to ensure tomorrow’s heritage by recording past and current milestones for the city.

Allen is also home to one of the only remaining stone dams in the United States used as a water station for the H&TC railway. The remaining site includes the stone dam, a foundation for a pump house and a foundation for a water tower which is designated by the Texas Historical Commission as a State Archaeological Landmark.

One of Allen's most recognizable landmarks, the Old Stone Dam, will undergo a process to reduce the damaging effects of erosion. The existing gabion wall, large baskets of stone used to stabilize the creek bank, has become unstable. An enhanced gabion wall will be installed to stretch downstream and help stop future erosion.

The City of Allen incorporated in 1953 and has experienced many growth spurts over the last 60 years bringing the population from as low as 400 to its current inhabitants of close to 86,000.

You can learn more about how Allen got its start into becoming the great city it is today by viewing the “Tales of Allen” series produced by the nationally award winning Allen City Television (ACTV).
VISITOR'S GUIDE
SIGN UP FOR NEWS & EVENTS
FIND A HOTEL
MEETING PLANNER NEWS